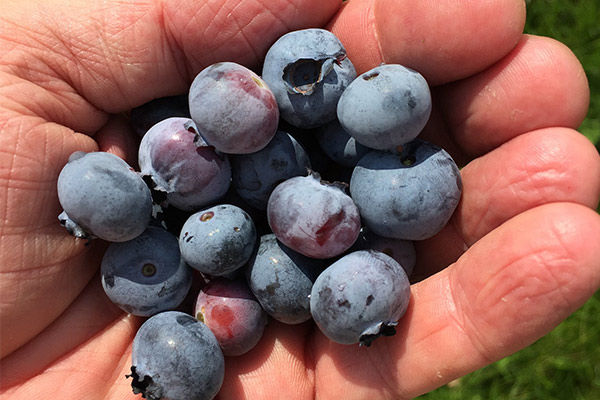 So maybe technically this should be recorded in June, since the events described below happened yesterday on June 30th, but  we already have a lot of news stacked in June and I thought the pictures that accompanied yesterday’s adventures would look good as part of a new post. 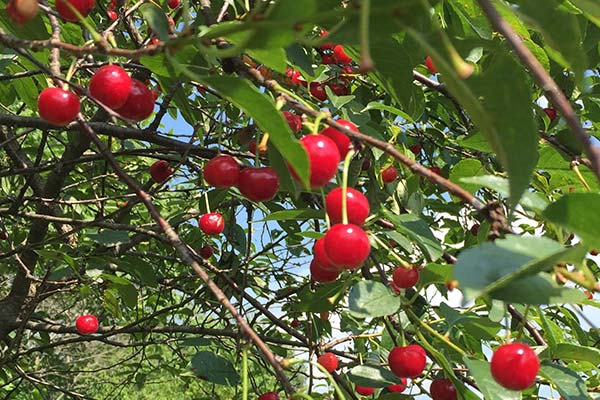 One of the oldest trees in the semi-dwarf orchard is the Montmorency sour cherry tree.  You’ll have to get up and check the garden chart (it’s a spiral ringed sketch book…I always kept it in the bookshelf next to the kitchen, but God knows where it is now…anyway, if I’m not mistaken, that tree was planted in 2006!  One of the very first.  Nearly all other trees in that orchard are younger because they had to be planted over and over again while I was developing the land, keeping out critters, etc.  Other old trees in that orchard include the wild peach grown up from root stock, the sweet cherry that never produces a single cherry (can’t remember it’s name…Kristin?  Kirsten?  Can’t remember and of course the Unknown tree which I’m convinced is Liberty.

Anyway…this old Montmorency tree really produced this year.  As did all the cherry trees (save Bali…I think it’s Bali…that or Meteor…I can never remember which is which).  Yesterday we (my comic friend Danny McWilliams is up for the weekend) pulled a good many sour cherries from its boughs, but it’s Northstar and Balaton that typically come to the rescue of my annual sour cherry pie cravings. 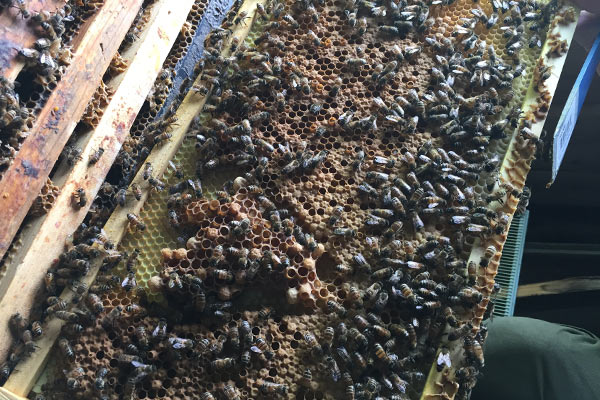 I had the bee guy come over because I was concerned about my colony.  Turns out my concerns were warranted.  The caps on the brood are not consistent enough.  He gave my hive a grade of a ‘c’ and told me that he would do some research as to what is going on.  I did a little online Dr. Googling, but was unable to alit on anything that I thought looked like what I saw going on. 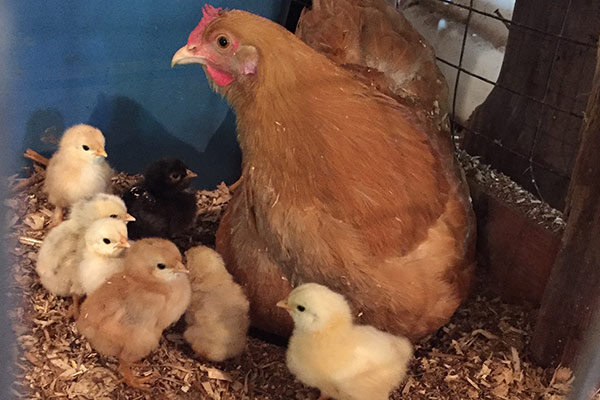 The Buff Orpington hatched out …I think she hatched out a total of 9 chicks, but two of them (black) died.  I found them underneath her sort of trampled.  They must have hatched out on the 29th or early morning of the 30th.  The chicks are quite small and still tender.

On the flip side, the flighty Japanese bantam cross…the one that sat on eggs on top of the hay mow tool shed… is a fierce mother.   She’ll attack the dog with raging screams and spurring feet. 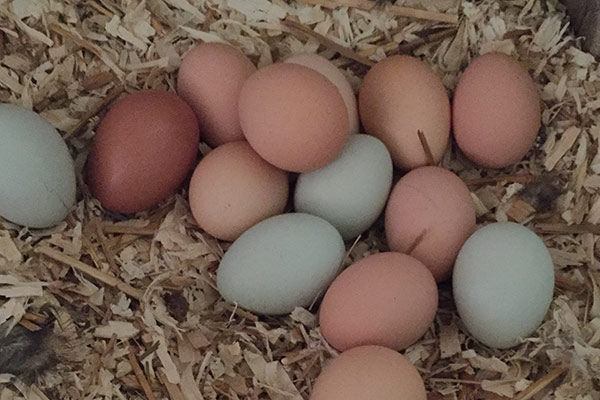 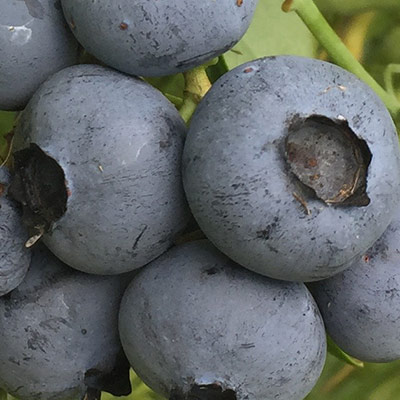 I think it’s one of the finest crop of blueberries I’ve ever had.  A moist spring and summer has kept things well hydrated and the 2-to-3 inches of bark mulch that I put on the beds this early spring I think really helped as well.  Additionally everything got a good dose of sulfur and fertilizer this spring.  The result?  Good set of fruit and vigorous plants.

This year is a departure from old.  I cut locust posts and strung a wire between the two to form a kind of clothes line.  Next I draped a large bird net over the whole set up to form a long tent.  It’s the most satisfying net job ever.  I still have to complete work on the other row, but this year, I may actually get to harvest some blueberries (though at the time of writing this, I see several birds have already ventured underneath the net to eat ‘under the veil’. 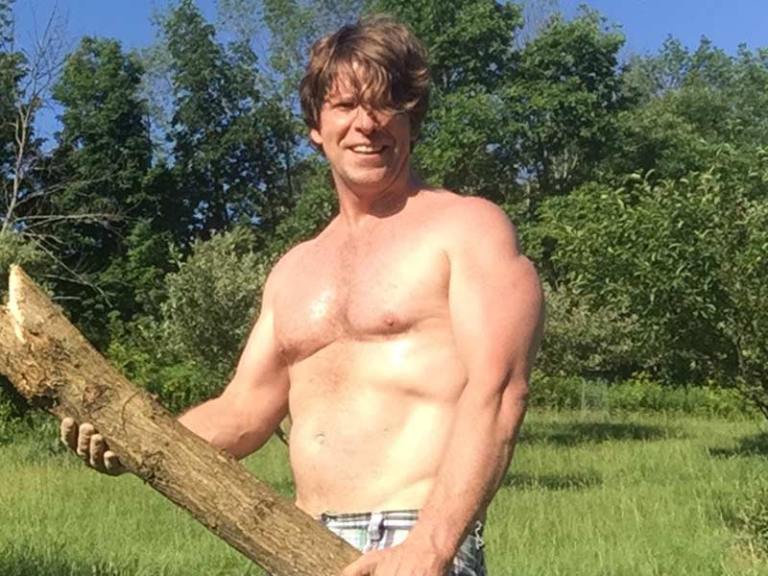 So I’m sitting on my deck yesterday outside of the guest room facing the barn, when I stopped to pay attention to a steady buzzing sound that I had been unconsciously hearing for some time.  The bees were-a-buzzing.

Buzzing, in fact, a patch of wild mustard that  I had fatefully failed to yank from my border beds. Gathered on the spindly architecture of the plant were 50, no 100, more probably, honey bees.  Their pollen sacs were like designer yellow saddle bags.  As fate would also have it, I failed to weed the potato bed and they too were now drowning in a haze of yellow mustard flowers, all of which were kissed by hundreds and hundreds of honey bees.

The bee guy told me that the colony had a mite issue.  If it does, the inhabitants are making a great attempt at looking like the picture of health.

Speaking of potatoes, I stole two near the surface just yesterday.  Hard and crisp with freshness.  Each was grenade sized.  Cut them, sautéed them with butter and fresh chives, and then finished them in the oven.  Delicious. 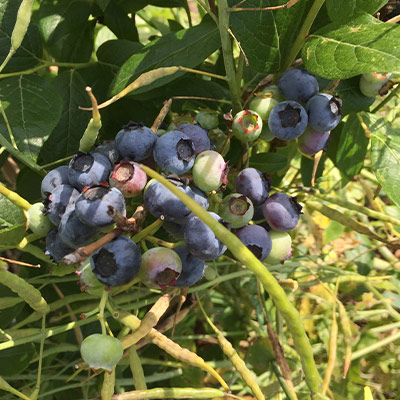 After a few hours of weeding, I strode through the lower uncut fields near the weeping cherry.  The fields have taken on a meadow quality with a variety of plants.  The idyll has attracted a pair of mating redwings that dive bombed and screamed at me fearlessly as I must have neared their nest in the waste-high scrub.

Elsewhere, robins and other birds snack on what’s left of the sour cherries.  They grab only the ripest, then fly to the drive way where they peck at the fruit, dazzling red in the morning sunlight.

Well I know what I’m planting more of in the upcoming years.  The asian pear that I planted …I think this was three years ago now, has several pears on it.  I thought it needed another asian pear pollinizer,  but it must have been impregnated by the pollen from the numerous pears up wind of it (which by the way are starting to droop their limbs under the weight of their fruit).

But as my eyes caressed the stream, the fields, the orchards, and then lifted into the hemlock forest…as I thought of winters without projects and fireside dreams of green…as I think now of days without a weedy patch of mustard greens with bees above them bobbing, I think this property won’t be sold.  Not for any other better venture at least.   This is where it all came together.  God, my scattered mind, the shards of my childhood traumas (the loss of my father, finding out I was gay and later, the horrific death of my mother).  This is where it all converged into some kind of sense, some kind of peace, some kind of genuine contentment…even a few smiles of joy.

This could have been a spectacular growing year had I gotten things in on time and the animals had left them alone.  We have had warm weather and steady rains.  The world outside is tropical.

Already stealing some potatoes from the surface around the plants.  They did well this year.  Perhaps could have done better had the mustard not been allowed to grow so tall in the garden, but then, where would the bees have collected their pollen?

About a week ago, my Jersey Giant went broody.  She’s massive and I believe, she’s sitting on a massive clutch of eggs.

I noticed the classic broody ‘I’m-a-great-big-chicken-blob’ posture of the bird when I returned from a work trip. She had commandeered the main egg-laying spot and there had probably been a couple of clutches laid on top of her before I arrived.  A quick check proved that there were enough eggs stuffed under her to nearly spill out the sides.  It was a painful check to.  She not only pecked me to leave her alone, she bit, grabbed and twisted my skin with her beak.  It hurt pretty bad.  I should have written the date down, but I would say she probably went broody on July 14th or 15th which means that she should hatch out on the 4th or 5th of August.   Great. I’ll be home!