Borage, shown in the opening shot, has almost nothing to do with August except that this late bloomer dazzled in the setting sun.

Borage began in the garden about 3 years ago.  Since then, it has reseeded itself and been a bright blue light house to every manner of bee.  When I remember, I tear some of its hoary leaves and stuff them into a glass of cold water.  They flavor the drink with the mildest taste of cucumber.  Very refreshing. 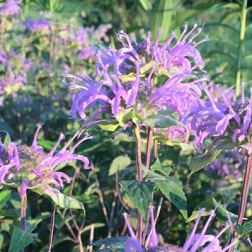 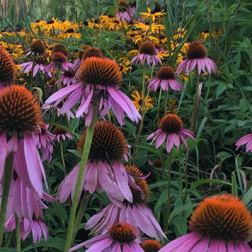 From left to right, Eupatorium.  Some kind of medicinal qualities.  I forget which.  Hold on, let me find you a link.  According to the blog I just read, native Americans and early settlers used to use it for about everything including impotence.  I’ll take two!

Middle shot is one of Jennifer Gabriele’s favorites, monarda. bee balm or bergamot.  The leaves have a lovely fragrance when crushed.  The flowers come in the purple variety shown above and the bright red probably seen elsewhere in this blog.  The purple kind likes the meadow, the red likes the moist banks of the stream.  Both are beloved by bees, but curiously enough, not the honey bees.

The last pic is of course cone flower or echinacea and rudbeckia.  They have been slowly taking over the hillside next to the house and I love to sit in the patio and look at them.

Redhaven peaches are the first of the peaches to ripen and always ripen in the first week of August.  I was introduced to them when one of the growers that I purchase from threw in a dwarf red haven peach tree as some sort of prize for ordering with them. I planted it at the edge of the barn meadow never dreaming that it would live.  But it did live…indeed thrived.  Nearly every year, its branches have been bent with ripe, large, melting, sloppy, delicious peaches. 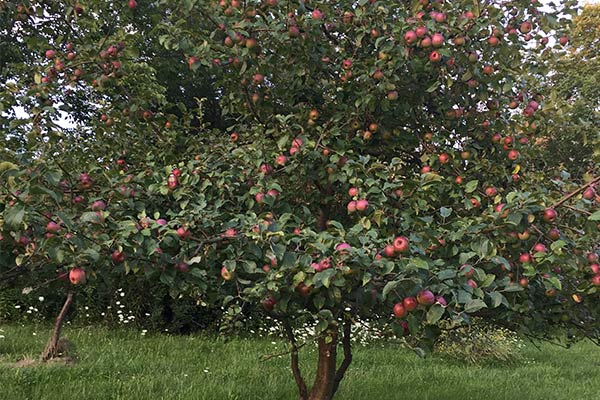 It might not look like much, but this tree represents a lot of powerful feelings…hope, desperation…yearning is probably the best word.  It was the very first tree planted on the farm probably in the summer of 2004 or 2005, the same year, if I’m not mistaken, that I purchased the property.

All of this is rehashed news:  When I got the place it was all overgrown with teasel and goldenrod.  I had no mowing equipment, no ATV, nothing.  David, my boyfriend at the time (and one of the best), and I would travel to the property, spend the day poking around, light a fire next to the strea,m and figure out some plan for dinner.  After we ate and drank, we made our way back to the Wyalusing hotel for a good night’s rest.

During one of these visits, I roped him into coming with me to the K-Mart in Wysox.  There I purchased a discounted tree, the label of which I threw onto the floor of my truck thinking, ‘I’ll get to that later’.

We planted the tree in a grove of head-high weeds.  Having gone to the farm earlier in the year, when the weeds had been laid low by snow, wind and rain, I had gotten a lay of the land and knew where I wanted the orchard to be, but of course now, it was nothing more than a thicket of weeds.   I remember stopping at a stop within the blind path of scrub  and saying, “I think here”.  After we dug a bit, David, clearly standing back from my ‘vision’ and wondering what the hell I was doing, said, ‘Bash, you’re something else’.

I never retrieved the label that blew around on the floor of my truck for weeks and finally, I’m assuming, blew out the door, so I’m not certain of the variety of this apple tree, an apple that annually ripens a delicious tart, firm apple sometime in September, but research suggests that it is a Liberty apple and, for some reason, that seems right.