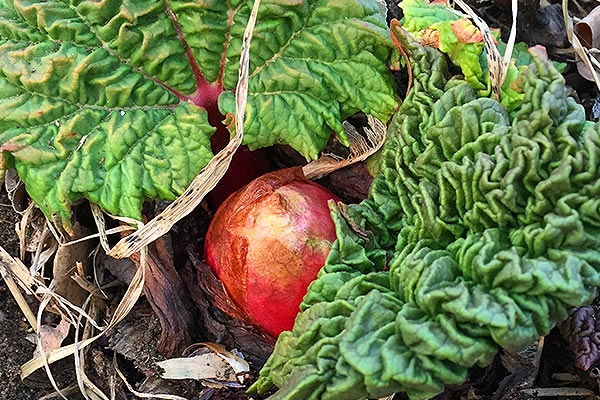 Yesterday, no fooling; we had a beautiful sunny sky, and warm signs of encouragement everywhere, April 1st, was a day that said to the world, ‘Spring is here’.

The Fool’s Day arrived on the second. I awoke to 5 piles of dog vomit ( I may have told you that I threw up violently the evening before.  Because I was sleeping downstairs, I just walked out side and did it…had she eaten it?).  Anyway, I awoke to 5 piles of vomit and 5 inches of fresh, white, pure snow.  Now that I think of it, remind me again, which is the pile of vomit?

Checked the journals from years past.  In 2016, the first egg mass was spotted on March 18th.  This year, the first one couldn’t have been deposited earlier than March 31st.  Saw two different kinds.  The one, a salamander mass, smallish.  Each one attached to a small underwater branch and suspended a good 4 inches below the surface of the water.  The others I believe are all wood frog eggs.  They are deposited as far away from the salamander mass as possible, in very shallow water, floating on the surface.  I want to point out that there has only been two days of calling of frogs and then I spotted the egg masses.  Before that, it has been too cold or the pond was partially frozen.

It is very cold.  Today’s high was only 35 degrees.  Wind is bitter and the air is icy.  I checked garden journals and this year is keeping up with some of the longest winters we’ve had.  I suppose I’m at peace with it. I’d rather have things open up later rather than sooner.  Less risk of frost die off.

I may or may not have posted that I have put in peas and lettuce to date.  Just today put in a row of peas treated with thiram.  The seeds are blue…normally I’m used to the pink fungicide.  The treated seeds have a rotten egg like smell…that or I’m digging up one of the eggs that the dog buried.

Made a remarkable discovery in the vernal pond.  Those white things I’ve been noticing on the. floor of the pond?  They’re spermatophores…potentially from the spotted salamander that I’m so eager to have live here.   I took pictures. I’ll load.   Looked into the pond just yesterday…maybe the day before.  There are four times as many wood frog eggs as there were on the April 2nd writing.  Saw a couple of red spotted newts swimming about.  The clutches of eggs that I think belong to the spotted salamander are still there (but there are only two masses that I see).

Hard boiling the eggs for only 11 minutes and then keeping them handy to snack on.  So creamy!  I love them.  If you’re reading this and you know I died of a coronary, you’ll know why.

Bees come this Saturday!  I have a couple of frames filled with honey and others that have built out comb. I’m going to stick those into the hive with the new arrivals to keep them sated until the warmer weather gets here.  Forecasts call for 50’s and rainy for much of April.

It has been a very cold spring.  If there are frogs still left in the pond, they’re probably skiing from one mate to the next.  The only good news is that the pond has been retaining enough warmth from the day to not freeze entirely solid, just a thin coating of ice on top. I suspect that these animals have cold snaps figured out.

Still, if you were to weigh my hatred of this wretched cold (and fretting about my arriving bees and the lives of all the other honey bees around) against the reassurance that a late spring means less chance of a killing frost to fruit trees, the sunnier outlook prevails.

I have also been very good about getting things ready for the first real warm days of spring (of which we have had none…only one week of mild weather in February). Bundled in a coat made for January, with gloves and hat, the dog and I have:

I promised a paragraph about this, but I don’t feel like doing it right now.  Maybe a long entry from the platform of my new deck!  You know, after the goddamn snow melts!…and the deck is built:)

The woman at the feed store (she is a cousin to Jade that used to…maybe still does…work at Wyalusing Pet Clinic) is incubating a bunch of these ducks.  Supposedly they are a rare breed and great for meat and eggs.   I promised her I would take six, but that means I have to build a duck house!  Oh, well, I’ll stop bitching and start enjoying the fact that I am literally LIVING my dream :). BTW, I already set up a section of the barn that includes a heat lamp (remind me to buy the bulb, the one I have burned out), fresh wood chip mulch, and a cute little kiddie wading pool (pictures to follow) in preparation for the ducks arrival I would say in 15 days or so. (UPDATE: They came.  I love them.  So cute.  I’ll take a pic once they aren’t so shy)

Bees…last entry and then I’ll shut up

So the bees come this Saturday.  It’s supposed to be only one of two warm days we have before the weather returns to temps in the forties/fifties.  Here’s the plan:

The bees arrived and as though nature was trying to do its part to help out the temps climbed to 80 degrees.  I drove to Wilkes Barre and picked up my package.  Installation was uneventful EXCEPT that the package and the queen cage looked NOTHING like any of the videos I watched.  For more on setting up the bees, see the post Package of Bees.  (Update:  Bees are doing great!  The pollen haul during the warm days is so cool to watch. Mostly a yellow pollen, but I’ve started to notice that they are collecting a greenish colored one ( I have read that it is probably maple) and a bright vermillion one (I have read that it is henbane or as I call it ajuga.  It is indeed in bloom here. I have a significant amount on the farm so I’m hoping that they soon start to forage on it). 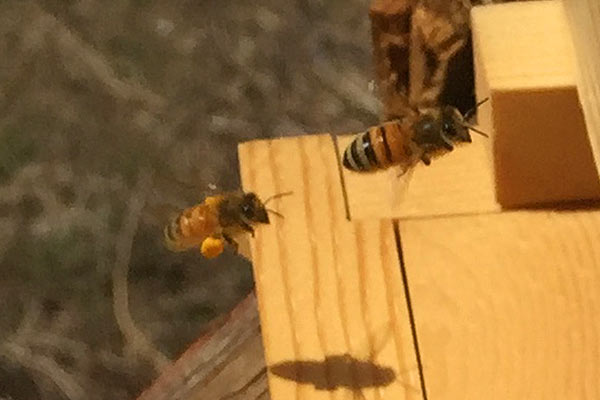 Since the bees have been installed, the temperatures haven’t been higher than 45 degrees.  There have been days when I’ve walked outside and said to myself, ‘It feels like February’.

Despite the cold, I have a collection of daffodils, the ones protected by the stone wall, that are in bloom and the forsythia is perhaps just a few days away from blooming.  Grass has greened up and I’ve noticed that the strawberries are looking invigorated, though why, I have no earthly idea.  Certainly the skies are no inspiration for them.

On a walk near the stream, in search of pussy willows that might serve as a pollen source for the bees when the temperatures get warmer, I noticed the catkins of the river birch for the first time.  I believe the bees will go for them as soon as the weather permits outdoor activities. 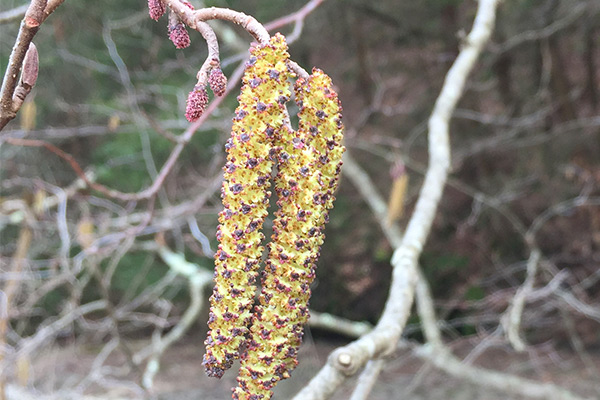 Finished the fencing project in the upper field and in a fit of I-don’t-know-what called the excavator to visit again to create another steppe of land just below the one he did last year. I want to order a mess of wild cherry trees from Musser (they are famous for their Indiana County wild cherry) and install them.  I read that they are fast growing and that the honey bees love their flowers.  I know the birds and other wildlife will be happy with the cherries that they produce.  Remind me to order one or two lindens with those cherries and to put them up there or on the walk from the small creek to the lower garden.  My very own Unter den Linden. UPDATE: I had the guy out.  He has not gotten back to me. I think he’s not going to do the job.

Not enough time in a day…

Oh!  Check out the deer carcass the dog and I found.  I think she’s know about it for quite some time, but I only discovered it about a week ago.

Oh!  Also…I think there is a pair of ducks nesting in the swamp.  What kind you ask?   Um. Hold, let me look…

Left that sentence to look online to see if I could find the duck. I couldn’t.  Note to bloggers out there.  Why don’t you write a post called:  Wild ducks of Pa?  There’s no competition for it, I can tell you that!  The duck is…hold, let me see if I can find an image…

I can’t.  Anyway…it looks like a small, dark colored duck.  Much smaller than a mallard.  I didn’t see it on the ground, only after it took flight with its mate (I presume).

Today is gray and ugly, but supposedly the clouds are going to give way to sunshine and 60 degree temps with gusty (30 mph) winds. Tomorrow 70s and 80s by Wednesday (when I have to head to the city(!) for shrink appt.