We had a mild winter and early spring.  Frogs were already breeding in March. These pictures were all taken in the first two weeks of April.  I bought a 4 wheel drive tractor and I finally was able to get a handle on  mowing. The fields look great. The weeping cherry had about 3 days where the weather was warm enough for insects to come and pollinate her.  She was covered with honey bees and other wild foragers.  The bees were not mine.  Mine, all three hives died this winter.  Two were dead even before December and the last one succumbed in March. 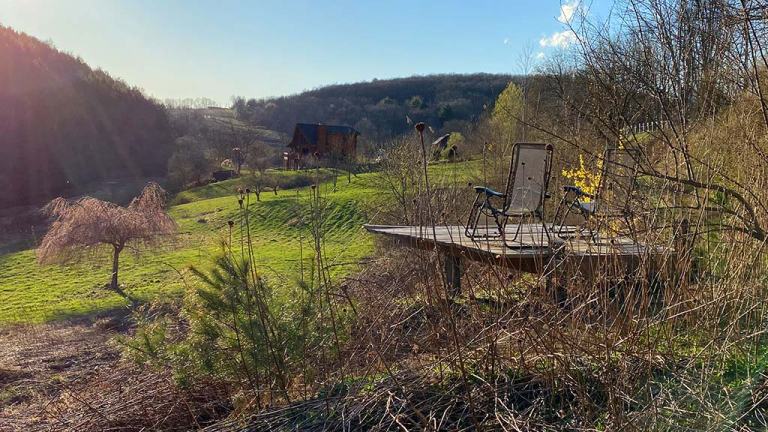 The deck is propped up on four locust posts. I built it two years ago this spring.  You can espy a forsythia bush just through the two deck chairs.  By the time you are reading this it should be huge.  Look out for Persimmon tree when you visit. It will be in the fore of where this picture was shot.

This is the magnolia just off the side of the house. It died completely to the ground one year, and then returned back from the roots.  Unfortunately cold snaps too often burn all the blossoms.

I’ve really succeeded at creating a park-like feel with the property.  One of my clients, Howard Gittelman gave me these benches.  Since then, I’ve found a few more on the streets of NYC.  I have a bench from the old Gasgogne, from Howard, and some teak chairs I found.  They’re all scattered about the property now so that you can have a seat, look at things, and enjoy the beautiful views. 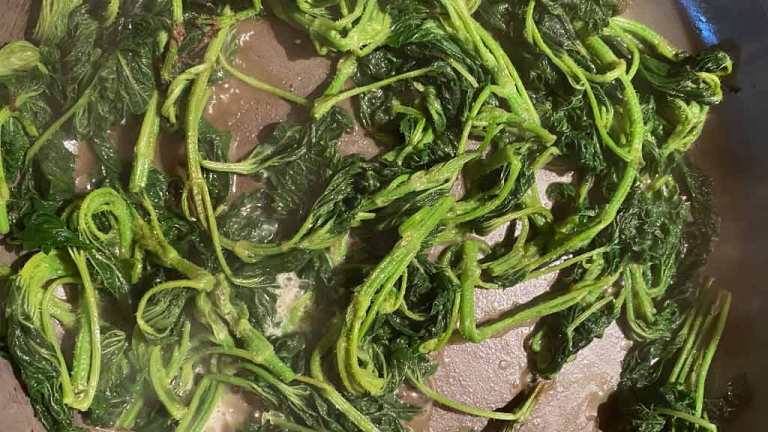 A before and after shot of stinging nettle. I’ve been eating it a lot this year. It’s absolutely great.  If you are searching for it here on the farm, you will find it on the hillside next to the drive, all around the barn, and near the creek next to the asparagus garden.  This year’s shoots were big enough to collect by the top of April.  I gathered them, rinsed them, par boiled them for about 3 minutes, then transferred them to a colander, drained them, and then sautéed them in a pan with butter.  Add lemon juice and/or garlic if you like, but you don’t have to make any apologies for these greens. They are absolutely delicious. They taste like spinach and maybe just a little bit like asparagus. They’re also packed with vitamins. Look at this nutrient chart. 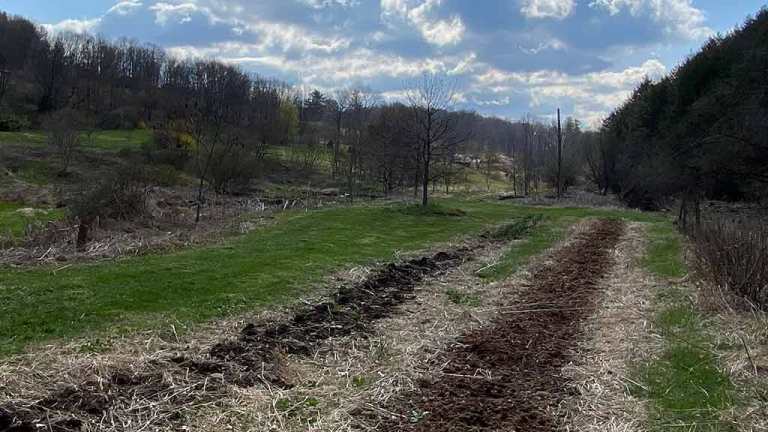 I don’t think I’ve ever photographed the asparagus garden from this angle. Zoom in so you can see the home in the distance as well as the bank covered with daffodils.  From left to right you have potatoes (see below), asparagus (mostly sown with seedlings from main bed, and then the currant row (so glad I have them…see more on currants below) 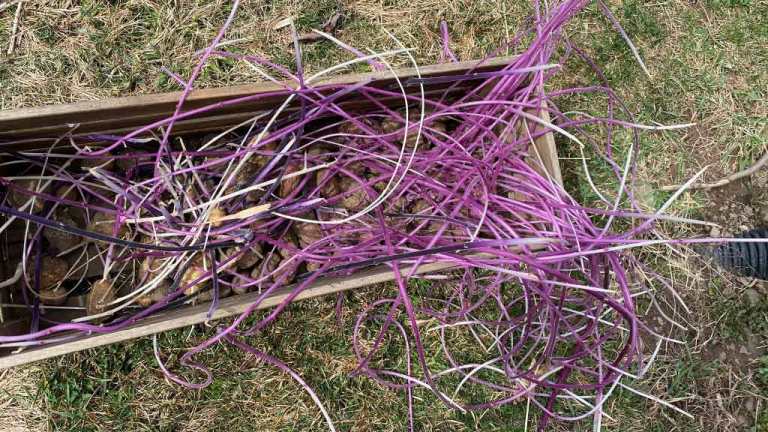 Last year’s potato harvest was huge. Unfortunately, I don’t have the refrigeration to keep the potatoes so they exploded in growth in my basement.  Here is a shot of the crate that I had left.  It has been placed outside in preparation for planting in March. here you have red, blue and kennebec potatoes (maybe some Germans in there too)

Here they are in the trench. I always bend over the elongated sprouts hoping that they will send up shoots all along their length.  I don’t think that’s what happens. The trench was dug about 6 inches deep and covered with soil. I will top dress with aged manure as they sprout. 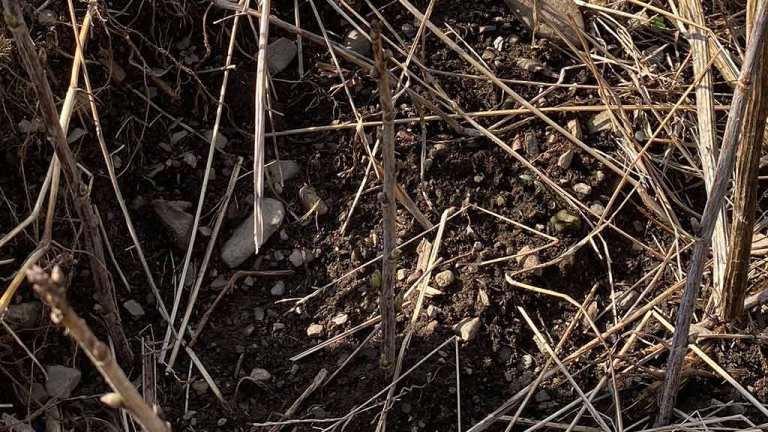 I read that you could propagate currants just by trimming off limbs and sticking them into the ground. Why hadn’t I read or thought about this before?  I love the look of currants gleaming in the setting sunlight. There isn’t a more perfect read. They also make a fantastic jelly.  There were several volunteers hanging around the parents. They weren’t limbs covered over with earth, but I suspect berries that had fallen and sprouted. I dug some up and gave them to James Walsh and Suzanne Grodner. These will go to lengthening the existing row if they sprout.  This year, I ordered a ‘spice bush’ or a black currant bush from St. Lawrence. If it’s as easy to propagate as these, I will only need one! 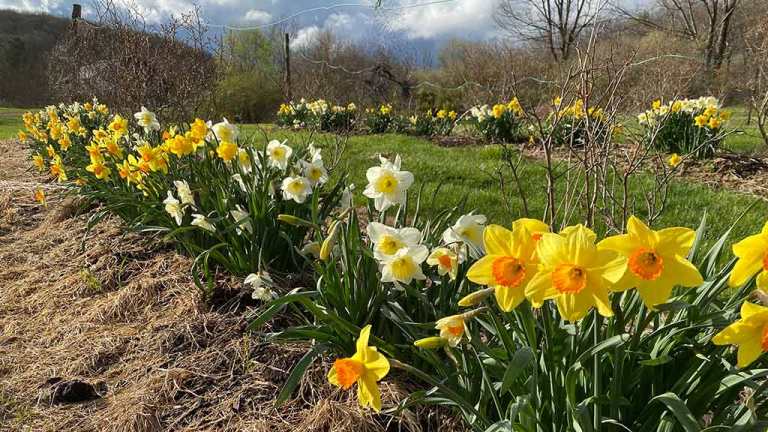 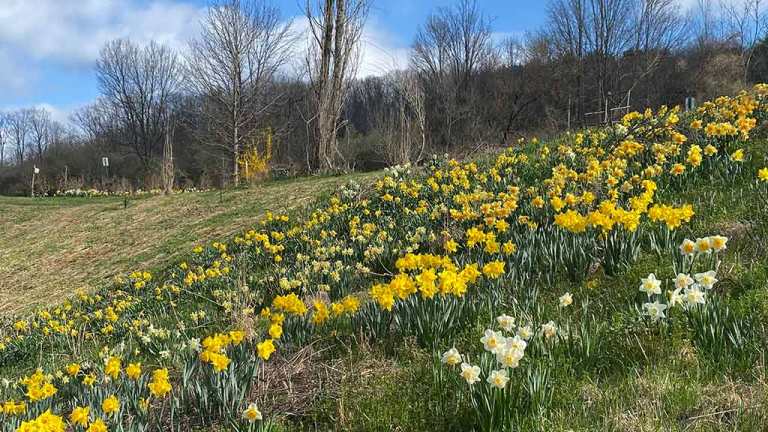 Over the years I have planted hundreds of daffodils.  The first planting was along the road the first fall after buying the property that July.  Then I embarked on planting one of the steep banks near the house (shown). That was tough work, but that planting has been alive for nearly 20 years!  I also used the space next to the blueberries to plant several varieties where they now thrive.  I also gathered at least one of every kind I have and put them in a vase in the guest room.  Now if only I had a guest! 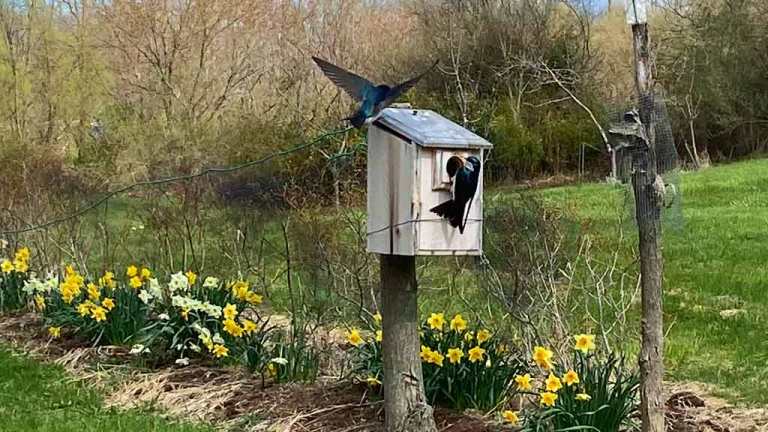 Tree sparrows.  Flying porpoises.  Aggressive, acrobatic, cursive writing in the sky. Here they celebrate or fight for this home on a post that anchors the net for the blueberries.

Garlic. About 60 or so plants.  I planted it in November.  Look how thick and healthy!  The lower garden’s soil is excellent.

Wood frog eggs. The red spotted newts eat a lot of the young.

Newborn rhubarb.  Only about 5 inches tall here. Such beautiful red. 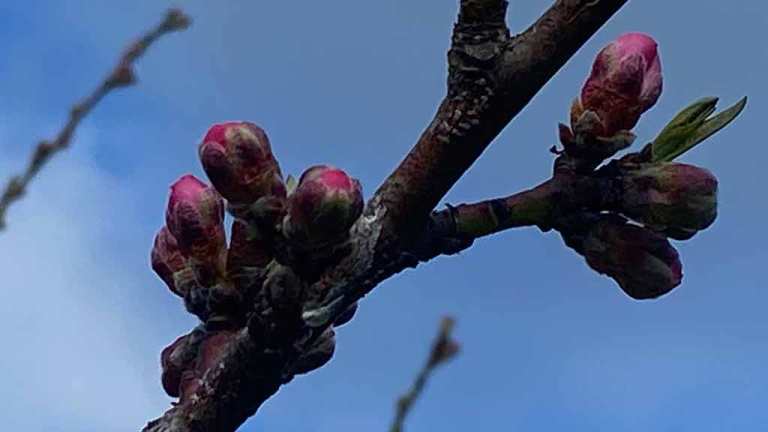 I don’t have to tell you what this is, do I?  Hope that the upcoming 27 degree weather doesn’t ruin the crop.

Sweet Winesap.  I don’t care much for the fruit, but this bud is tremendous. (Cheating a bit here, apples did not bloom until mid-May and it’s a good thing too.  There was a very hard freeze (26 degrees) in early May)

This is likely one of my Saskatraz bees.  Two new boxes this year.  The Saskatraz arrived during a very chilly 3rd week of April, but I packed the box with honey from the previous year and they got through the cold snap just fine.  Italian bees came later in May.  Both have full combs of brood and weather has been holding up.

This is the peach (Gloria?…Can’t remember…pretty sure it’s from Adam’s County Nursery). It has very large blossoms for a cultivated peach that remain on the tree for a long time. The blossoms are so nice, that the tree would be a super ornamental.  The peaches produced are large, but I have never tasted one!  My travels always have me missing the harvest point. This peach bloomed early enough that it missed the hard freeze we had in May.

You know what this is, right?  This pear, Luscious, should win an award.  I have it grafted onto he Hudar that Shirley gave me and two other pears in the orchard.  It produces annually despite hard weather and cold.

Not sure if this is one of my bees OR if it’s a wild one. I’m convinced that there is a wild hive on the east side of my property ever since I drove south on 187 and smelled honey hanging in the air somewhere between my property and the Potter’s home.

I bought a 200 dollar grill and never use it. I’m too afraid that the bear will smell the char on the grates and wreck it. Instead, I grill on the rock wall on the south side of my house. April had plenty of warm days for grilling outside.